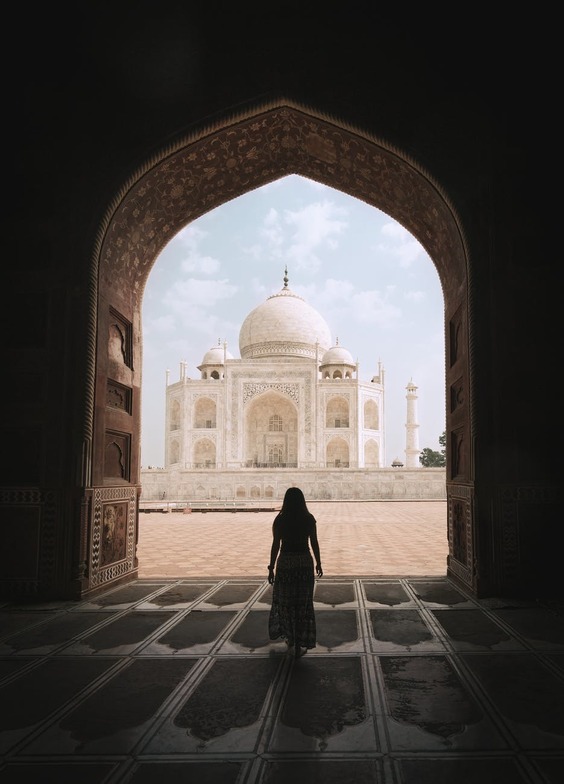 21 Jesus went away from there, and withdrew into the district of Tyre and Sidon.

22 And a Canaanite woman from that region came out and began to cry out, saying, “Have mercy on me, Lord, Son of David; my daughter is cruelly demon-possessed.”

23 But He did not answer her a word. And His disciples came and implored Him, saying, “Send her away, because she keeps shouting at us.”

25 But she came and began to bow down before Him, saying, “Lord, help me!”

26 And He answered and said, “It is not good to take the children’s bread and throw it to the dogs.”

27 But she said, “Yes, Lord; but even the dogs feed on the crumbs which fall from their masters’ table.”

28 Then Jesus said to her, “O woman, your faith is great; it shall be done for you as you wish.” And her daughter was healed at once.

“Tyre and Sidon are port cities located in modern Lebanon on the Mediterranean coast”. . .and in Yeshua’s day these were known also for being “Gentile cities north of Israel” in which “crowds from Tyre and Sidon” would come “to see and listen to” Yeshua (Mark 3:7–8).[1]

It is likely that the Phoenicians of the Iron Age (1200-333 BCE) came from the Canaanites of the Bronze Age (3000-1200 BCE). The name “Phoenician” probably comes from the Greek phoinix. The name “Canaan” may come from the Hurrian word, kinahhu. Both words describe the same purple-reddish color. This would mean that the Phoenician and Canaan’s had at least one similar word in common, for the same people, but in different languages and at different points in time.[2]

The text says a Canaanite[3] woman came to Yeshua (also named by scholars as the Syrophoenician Woman, likely from the history noted above). Yeshua’s disciples were not exactly excited about her disturbing their peace by her continual crying out for the Lord to show her, or specifically her daughter, mercy. The daughter was not simply demonized, but the text says she was (NASB’s translation), “cruelly demon-possessed.”

This was clearly a desperate woman, who would not take no for an answer, placing a continuous demand with her faith and cry on the power and authority and compassion she believed the Lord Yeshua possessed and that which was available through Him. We are not told how she knew this.

Perhaps she had heard of his exploits of healing and freeing people from demonic possession. However, her reference to Yeshua as not simple Lord, but “son of David,” along with her humble approach, says she knew more than simply that he has a past record of delivering people. This woman has clearly heard the Good News of God before this time and the Lord ultimately makes a point to commend her publicly for her great faith.

The word translated “cruelly” in verse 22, is the same word κακῶς kakos that was used and discussed in a prior article[4] covering Matt. 4:24. In Matt. 4:24, κακῶς kakos is translated “illness,” but as we noted, the LXX’s various uses of the term collectively and as a kind of “term of art” you could say, implied one who has come “under a curse” or is “cursed” in some way. Thus, κακῶς kakos is associated with and can imply both physical as well as mental/emotional kinds of illnesses.

Notice that at first, Yeshua did not respond to the Canaanite woman at all. However, knowing the Lord’s compassionate character as we do, this may seem like “shocking” behavior at first glance, and biblical writers will often employ such tactics to bring your attention to something important. Yeshua’s behavior was clearly, in this moment, deliberate, and based on a kind of training exercise for His disciples that revealed a cultural bias the disciples may not have otherwise recognized was present in themselves.

Note that Yeshua neither responds, nor feels the need to quiet the woman either. It is the disciples who finally come to Yeshua (clearly getting annoyed with her shouting at them without ceasing), and they IMPLORE Him saying, “Send her away, because she keeps shouting at us.”

Note, I believe in this case Yeshua was trying to get the disciples to respond to her cry and meet her need themselves (like a training exercise), but instead, they just get annoyed. They clearly do not value her since she is not “of them.” Luke 9:49 and elsewhere, further reveal a little bit more of this character and cultural problem that has to be corrected more deliberately by the Lord later on.

Thus, when the disciples do nothing and ignore the woman’s distress, intending to send her away without meeting her desperate need, Yeshua steps in and teaches the disciples a valuable lesson, while also revealing their bias. At the same time, His approach demonstrates and draws out of the woman what great faith she has and meets her need according to her great faith.

Although initially from the disciple’s perspective, they did not believe this woman was “worthy” of their time or attention, Yeshua’s testing of her faith showed them the error of their false perception and bias. The woman passes the test with flying colors and the Lord grants her request, while also giving the disciples a much-needed attitude adjustment and doctrinal correction without shaming them publicly. Pretty brilliant don’t you think?

Note also the way her faith manifest, which showed forth several “fruits of the Spirit” that poured out of her when she was tested. She was:

PERSISTENT – She never quit or felt sorry for herself. She just kept crying out and continued to press in and place a demand on the power and authority of Yeshua, even when He appeared to be ignoring her at first.

HUMBLE & WISE – She does not take offense to being ignored and then challenged in terms of her status, for she clearly demonstrates her clear recognition of the power and merciful character of the God to whom she is seeking rescue and deliverance for her daughter.

GRATEFUL – Her statement concerning the fact that even the dogs eat the scraps that simply fall from the Master’s table, shows the degree of the depth of her faith. Although her daughter is in considerable bondage and in desperate need of help that only Yeshua can provide, in proportion to Yeshua’s overall power, such a task or request is truly like asking Him to give over only a tiny little discarded piece of bread that falls from His table.

The disciples, for their part, do not recognize the need, nor the faith in the woman, so the Lord here uniquely sets the stage for it to be revealed through His challenges and her responses. Had the Lord simply responded immediately, the richness or greatness of her faith would never have been revealed. Such a level of faith is inspiring. It also shows that her prayer to Yeshua, i.e. her placing a demand with her faith, pressing into His presence to pull on His power, resulted in freedom for someone not even in the same location as her. Thus, we see that prayer and intercession can result in deliverance, even from a distance.

Finally, it is important to note that the word “healed” in the close of this passage is associated with the concept of “deliverance” from demonization. “It’s about healing the soul of the victim and removing the stronghold that has given power to the presence of the demon.”[5]

The word translated “healed,” ἰάομαι ee’aw’oh’my, usually makes us think of just physical illness, sickness, or diseases. But here, being “healed” includes the healing of the soul realm, i.e. the area of the mind, will, or emotions that can develop strongholds for various reasons that demonic entities will exploit until they are challenged and told or required to leave by a greater force, power, or authority.